I booked the flights for my birthday trip to Japan last night. The price is surprisingly low, at only 500 quid return via Air France, changing in Paris Charles de Gaulle. It's costing me a lot more than the absolute cheapest flight at £393 but that was offered by Turkish Airlines, changing in Instanbul and adding up to about 17 hours bum-in-seat for the two legs which is a couple of hours more than I think I'd be comfortable with. The AF flight I chose operates via Haneda airport, a first for me as I've always landed at Narita up till now. The 6:00 a.m. arrival suggests I'll be hitting the Yamanote line at rush-hour...

I'm not going to spend a month in Japan this time around as I was originally planning but it's still going to be a bit over three weeks in total, centred around eating tanjoubi (birthday) ramen (noodles) in Onomichi (Heaven on earth) on May 18th. Buying a JR pass is next, it's likely to be a 14-day pass but I could fit a 21-day pass into my stay. The extra cost over the 14-day pass, about 13,000 yen isn't that much given the way I abuse JR passes -- if I did two more overnight trips on the Sunrise Seto in the extra seven days then that would save me the cost of two nights in a hotel. Have to think about it but there's no rush, I won't be buying one for a few weeks yet.

This is a bucket-list update since I've not been, well, updating this Livejournal thing recently and besides it's traditional at this time of the year.

Firstly, I hab a cood. First one I've had for a while, not serious or disabling, just a dribbly nose and a raw throat. Strong drugs are holding it at bay.

I have a job at the moment, a temporary contract doing call-centre support for VeryLargeOnlineRetailerCorp. It will end pretty soon as they start to slough off their seasonal staff now the Black Friday and Xmas peaks are over. It's not particularly enjoyable but it's not soul-destroying work either. I'll be happy to leave but I'd go back again next year if I'm "at leisure". As Pterry says, it's indoor work with no heavy lifting. The pay isn't great but it's not minimum wage, quite.

Since I had some cash coming in I plowed a chunk of it into another computer upgrade for myself, a Dell UP3214Q monitor which I got on a cracking deal on Black Friday from NRG-IT, a company I've bought other monitors from in the past with exemplary service and prompt delivery. I recommend them if you're in the market for an open-box return/refurbished monitor at a very good price.

I have no peripheral vision left. As they say, "Once you've tried 32 inches you can never go back". Feeding it a 4k (3840 x 2160 @ 60Hz) signal required a video card upgrade too, something with a DisplayPort output but that wasn't too expensive to source or tricky to set up. I've got my original main monitor, another NRG-IT Dell IPS display set up as a sidekick second monitor in portrait mode, 1440 x 2560 fed from the same video card.

4k is, well... I went for an IPS/IZGO dsisplay because I've been spoiled by my previous monitors providing the good colour gamut IPS technology provides. The extra pixels are really welcome when looking at content that benefits from it, like pictures. Text and browsing require an upscale to avoid appearing teeny-tiny, not surprisingly with the sheer number of pixels on the screen. My eyes aren't getting any younger and they really benefit for the extra display real-estate -- my previous 27" monitor was getting to seem a little cramped in regular use.

I've downloaded a few 4k videos to test the screen -- yes it is awesome but unfortunately the CPU (a four-core 3.2GHz AMD device) is not capable of supporting the frame rate. There's no hardware decode circuitry for 4k content in commodity video cards yet as there is for HD video at 1920 x 1080. This screen is the equivalent of 4 standard HD screens tiled 2 x 2 and having no hardware acceleration puts all of the decoding load onto the CPU which frankly isn't quite up to the challenge. There may be another upgrade in my future, an 8-core CPU should be a drop-in replacement...

Loncon 3 came and went in August. It was a Worldcon, 'nuff said. I toted that bale and lifted that barge before, during and after the con plus artshow construction and deconstruction as is my wont in such circumstances. I am starting to consider I'm getting too old for that sort of effort but I survived this one with a bit to spare. Not "never again", quite but the next-but-one British Worldcon may well have to do without my inestimable services in that regard.

Future plans -- I hit the Big Six Oh in less than six months time and since I have some extra cash in my back pocket I've decided to carry on the hallowed tradition of the past few years and celebrate my tanjoubi with ramen in Onomichi. My plans are still subject to change but I'm considering spending about a month in Japan this time with more travel around the country to places like Mount Aso in Kyushu and down to Kochi in Shikoku.

Just finished hacking on another long-term project, a really useful box. Nobody makes one of these as a retail product, you can't buy them in the shops. So what is it?

Well, it started out in life as a computer power supply that died spectacularly one day. I kept the metal case, threw away the rest of the smouldering electronic entrails and then started drilling and cutting. The resulting Really Useful Box contains a 13A socket, a 30-minute clockwork timer I rescued from an old electric cooker three decades ago, a 10A circuit breaker from a scrapped minicomputer of similar vintage and a voltage spike suppressing varistor from the "this'll come in handy someday" drawer. This box is really useful for powering stuff that might blow up when switched on for the first time and means I don't need an infinite supply of spare fuses and the timer lets me run things like battery chargers or lights for a limited period. Like I said, really useful. I wonder what I should call it?

My landlord bought a coconut. He had some difficulties opening it. I had an idea.

It worked. The end.

Note to self, in the morning its coffee THEN soldering iron. Nothing I can't rework but it's annoying, especially after reassembling the metalwork with its fourteen hold-down screws before discovering my mistake.

Ashinano Hitoshi, one of my favourite mangakas (Yokohama Kaidashi Kikou, Kabu no Isaki) is back in the saddle again with a new series, Kotonoba Drive running in Afternoon magazine. It's not anything radically different to what he's done before but that's not a problem for me -- basically a girl on a small-capacity motorbike (a Honda ST70, I used to have one about 30 years ago...) riding around town and experiencing stuff. 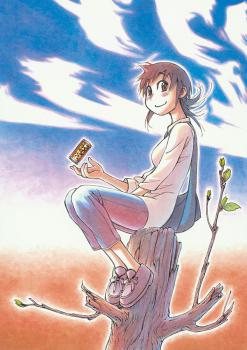 When I say "not anything radically different" I mean it. The first chapter of Kotonoba Drive is a reprise of one of the PositioN stories Ashinano-san published way back, set in a sudden sea-fog and the second chapter brings back the Glider Master from the same series. As yet there are no super-natural overtones to the series or at least not much and that was a feature of the original PositioN stories, a temporary disassociation from the real world that suddenly snaps back into place.

At least it's not Endless Eight.

I got a S/H last-generation video card for a bargain price at a boot sale a few days back, an Nvidia 8800GTS and I've only just got round to trying it out as I wanted to get through Problem Tuesday without shutting my machine down (I hibernate it at night as a rule.)

The video card I had fitted previously was an ATI/AMD device (an entry-model 5450, about as cheap as they come) so I changed cards with some trepidation expecting a lot of driver installations and hacking around at lower resolutions to get it to work since I was not just changing cards but manufacturers too.

In fact what happened was that It Just Worked. Windows 8 thought about it for a bit then brought my main screen up (a 2560x1440 Dell) in the same maximum resolution the old card had been configured for. It even remembered my second monitor's setup properly, a 1920x1200 display in portrait mode, no muss no fuss. Remembering the agony of configuring video systems in previous incarnations of Windows this swapover was almost... pleasant.

Digging through the tidal wash of rubble in one corner of the living room we came across a pile of old circuit boards which were originally part of a Symbolics LISP machine, one of the desk-sized workstations from the mid-80s. If anyone has an interest in acquiring these/taking them off our hands or knows someone who might be interested in them please get in touch. Pictures and more details on request. We can bundle them up and ship them if someone will pay the carriage but note these are big heavy circuit boards. We may also have a couple of original Symbolics LISP keyboards to go with them.

Just got a new toy, a small Arduino board called a Nano costing well under a tenner from the usual Hong Kong suspects via Amazon. It's about the size of a USB thumb drive with a ATmega328 CPU on board giving 32KB of program flash memory, 2KB of static RAM and 1KB of data EEPROM and running at 16MHz. It's powered by an on-board USB connector which also allows access to download and run programs. There's a lot of free support, example programs, coding help and simple tools to produce and test code (known as "sketches", based generally on C with Arduino specific extensions and libraries).

It's sitting plugged into my desktop machine at the moment with a green LED pulsing gently, my first attempt to code for it. As with most beginning projects it involved some cut-n-paste programming from a code example, "Blink", the basic "Hello World" of Arduino programming. By the time I had finished with it the simple blink example was converted to pulse-width modulation on a rising and falling cycle; it still blinks but the brightness rises and falls gradually instead of being on/off.

I have plans for it, another little project I've had in the back of my mind for a few months. I'll steal other people's code to get it working then tweak it from there -- my intention is to build an editing foot-pedal USB device that emulates a specific keyboard operation; press down to emit CTRL-C (copy) and release to emit CTRL-V (paste). Hopefully it shouldn't be too difficult.

did it seem a slightly weird thing to say.

"...measuring the LD50 figure for ingestion of octonitrocubane"